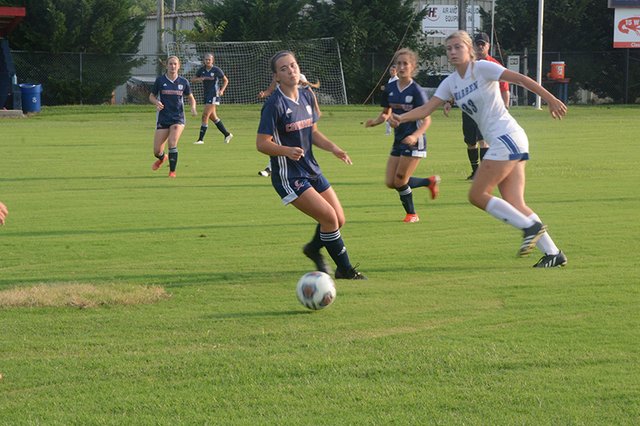 The WCHS girls soccer team has endured a lot of turnover in the past year, but they want to break through and become district champions again.

Girls football not only lost a big senior league, they also got a brand new head coach. New coach Kimberly Smith and the Lady Pioneers started their campaign for the season looking good on Monday, heading out to win a scrimmage against Cookeville 3-1.

New coach and Lady Pioneer football legend Kimberly Smith has been working hard with her girls all summer and with their season approaching, it was time for their first test.

The Cookeville Lady Cavs have a very good football program and are a challenge for any team. Smith’s team overcame the challenge, however.

The evening was dominated by the 2 goals of Bekah Jackson. In addition, goalkeeper Callie Jo Roberts was solid. Roberts was tried several times by the Lady Cavs and allowed only 1 goal. Jackson’s 2 goals, along with a goal from Samantha McCormick, gave the Lady Pioneers a good cushion.

The young Lady Pioneers goalkeeper was challenged several times, but her team made it easier for her by keeping the ball on the Cookeville side for most of the night. The game was a stalemate until McCormick opened up a high scoring first half with a goal after about 20 minutes of play.

Then came a goal from Bekah Jackson with 13:14 left in the first half.

With Cookeville in charge, Jackson scored another goal with 3:51 left to give the Pioneers an impressive 3-0 lead. Even after a late goal from Cookeville, the Pioneers still held a 3-1 lead and continued their fine defense, including a dive stop from keeper Roberts.