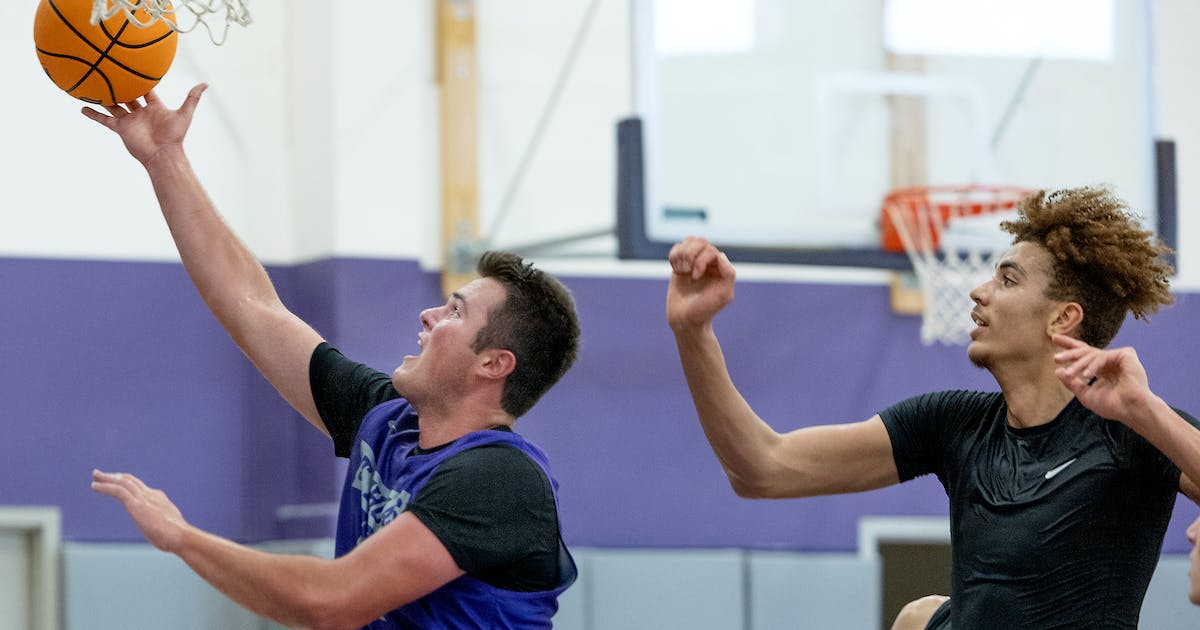 St. Thomas basketball made its Division I debut last year with a 10-win season, but Tommies coach Johnny Tauer knew the talent that could jump-start his program was soon on the way.

Tauer and his coaching staff call their current freshmen “founding fathers,” as they are the first full class after the official Division III move last year.

Minnesotans Ahjany Lee, Kendall Blue and Carter Bjerke, and Wisconsin-born Andrew Rohde arrived on campus this summer as the No. 1 recruiting class in the Summit League.

“I think it has the potential to become a very special group,” Tauer said. “They all come in as really decorated high school players and they’re really good students and people.”

Class of 2022 recruitment rankings had the Tommies just outside the top 60 nationally, even for some Big Ten schools. St. Thomas landed a number of players who had been recruited through major programs.

“It’s a real blessing to be able to play for the school in my hometown where my family can come visit me,” said Blue, a former East Ridge star. “I’m just really focused on being one of the founding fathers through this process that they’re going through. I just wanted to be a part of it.”

The Tommies finished 10-20 (4-14 in league) in their first DI season in 2021-22, but the influx of talent could mean a steady improvement. They won’t be eligible for the NCAA tournament until 2025-26, under an NCAA rule that requires a waiting period for schools climbing to DI, but they can now play in the Summit League tournament.

“All those guys have their moments,” fifth-year senior guard Riley Miller said of the newcomers. “Andrew Rohde is very good with the ball and can score goals. Carter is already a very good striker. Ahjany offers a lot of defense with his height and athleticism. In these six weeks of the summer they have all grown enormously.”

Lee, who won a Minnesota Class 3A state title with Totino-Grace last season, is the highest-rated recruit in the team’s history. The former top-100 prospect in the 2022 class was once offered by the Gophers, Iowa and Kansas.

Immediate playing time and the chance to stay close to home were key factors in Lee’s decision, but he is also grateful to be able to reunite with players who were part of the D1 Minnesota AAU program.

“I decided to come because I really wanted to be here and loved it here,” Lee said. “But Carter and I played in the same AAU team last summer. And Kendall was on the top team. When I saw Carter bet, I felt like we clicked so well. [inside] duo in the Midwest. It was something big to play with him at the next level.”

Lee’s height and athleticism should make him a rim protector. Bjerke, who led Wayzata to second place in the 4A class, is already one of the best three-pointers on the team.

“It really is a dream come true for me,” said Bjerke. “My mom and my dad both came here. My high school coach [Bryan Schnettler] played for coach Tauer. So I had that connection. I’m super comfortable with this place and excited to be here.”

Lee and Bjerke, both 6-9, have the potential to develop into a formidable frontcourt tandem. Blue and Rohde, both 6-6, are showing signs of being St. Thomas’ future backcourt.

Rohde, who led Brookfield Central to a second-place finish in Wisconsin, was the last to occupy the class of 2022. the mr. Basketball finalist felt something special during his official visit last fall.

“From that moment on, I knew it was a real family thing,” Rohde said. “I really wanted to be here.”

The Tommies will also be supported by transfers and Minnesotans Courtney Brown Jr. (Wisconsin-Milwaukee) and Drake Dobbs (Liberty). However, Tauer has seen enough of his freshman class this summer to realize that his vision of building a solid foundation is quickly coming to fruition.

“This summer has been great for them to acclimate for the past six weeks,” Tauer said. “There is a huge learning curve, but we are very excited.”