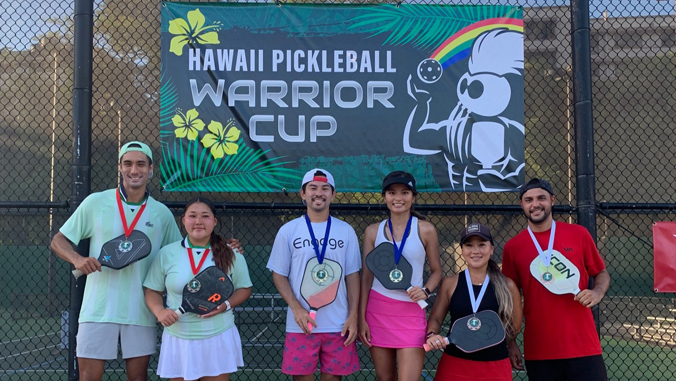 The first Pickleball Warrior Cup was held at the University of Hawaii on the Mānoa campus in support of the UH men’s tennis team, July 22-24. The event attracted more than 200 community participants where people of all ages and abilities gathered and competed in a fun environment and earned cash prizes.

Over three days, the Pickleball Warrior Cup featured women’s doubles, mixed doubles and men’s doubles, with participants aged 18-60 and over competing in five different skill levels from 2.5-4.5+ and each team with a gold medal $50 won. 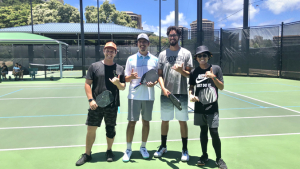 “We can honestly say it has been an overwhelmingly positive experience,” said Joel Kusnierz, UH head coach men’s tennis. “There is nothing better than seeing so many people laughing and having fun competing to support our program. Their energy was immensely inspiring. All week we were blessed by all the volunteers who showed up early to help us organize, set up the courts and then clean up.”

Kusnierz and Marcel Chan, UH assistant coach men’s tennis, organized the event to raise money for the men’s tennis program and further strengthen UH‘s relationship with the community by serving as a prime location for the community to come together, have fun and get some exercise.

“It was a great experience! The organizers were such gracious and wonderful hosts, the tennis facility on? UH was great, and our Hawaii pickleball community came out and showed great support for this fundraising event for our UH men’s tennis team through their participation and great play,” said Darren Okimotodeputy director at UH Sea Grant College Program who earned a silver medal in the men’s doubles 3.0 division.

The event provided an opportunity to reunite the community around values UH Athletics instills its student-athletes year after year: embracing opportunities to grow as competitors and individuals; classroom ambassadors are on and off the field; be grateful; caring and sharing; and dedication to compete hard and have fun.

“This was the first edition of the Pickleball Warrior Cup in UHand given the overwhelmingly positive feedback from the community, it certainly won’t be the last,” said Kusnierz.

The tennis team hopes to hold another tournament in the fall.