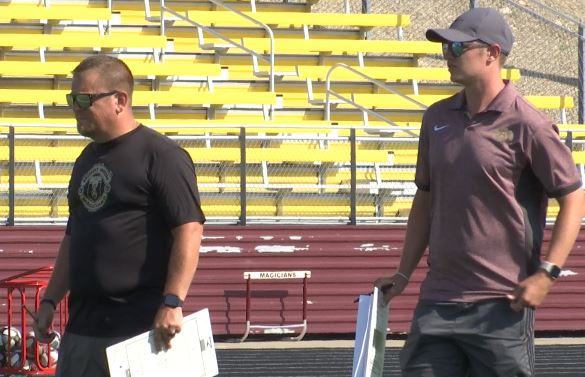 Boys’ soccer teams across the area are back on the field this week for the first practice sessions ahead of the fall schedule.

Reigning WDA champion Minot kicks off the season with new leadership at the helm, as the Magicians hope two can be as good as one.

Minot Boys Soccer hired this off-season not one, but two head coaches in Chad Oswalt and Jordan Foley to replace former coach Creighton Bachmeier. This was an idea they were both working on.

“It’s pretty hard for me to be a lonely head coach with my job. It was more or less me and Jordan together. I thought we worked well together,” said co-head coach Chad Oswalt.

“Chad and I kind of communicated and said we would like to work together and work on that as a team, so we talked to Mr. Lunde and put in our applications together to be co-head coaches,” Co-Head Coach Jordan said Foley.

The duo had previously coached together for the Magi at the junior varsity level for several years, which gives them confidence in their partnership on the varsity team.

Chad and I have been coaching here together for 8-9 years. I think we’ve had a good relationship with the club here in Minot and also through high school here. We have similar styles and great communication going back and forth. I think that relationship has been very strong,” Foley added.

“We started with a real agenda of what we expect from the JV two program through to the varsity program, so to keep that going it was definitely good to keep the coaching staff somewhat together,” Oswalt said.

Even with the change in leadership, the team hopes to build on the success of the previous regime.

“I think we just have to have the same mentality as last year. It seemed like everyone came with one focus last year to win, so I think if we just keep thinking we should be good,” said Minot midfielder Kade Anderson.

“Last year was an amazing year, something we’ve never seen before. So I think if we could just continue what we did last year, losing just four seniors, I think we’ll have a good chance again,” added Minot midfielder Brayden Oswalt.

“I don’t think it will change much. I know Chad and Jordan, they’ve been here for a while, they’ve all coached us before, we’ve all learned from them, so I don’t expect much to change,” Anderson said.

“It’s nice to hear that he will coach Jordan Foley, I’m looking forward to it as he has been the JV coach before. I don’t think much will change, but it will be fun,” said Brayden Oswalt.

The Magi open the season at home against Grand Forks Central on Saturday, August 13, with kick-off at 1:45