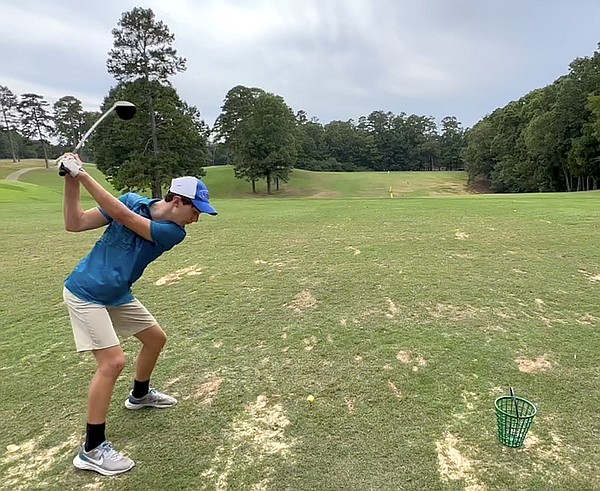 JESSIEVILLE — Jessieville’s boys and girls golf teams are led by head coach Jared White in their fifth year and training began in June in preparation for the upcoming season.

One day a week, the Lions will run nine holes to tackle a variety of situations.

“We are very young this year,” said White. “We’ve got some older guys — no older girls. We’re pretty light on the girls. Last year we had a freshman Hailey Holland. Last year (she) she hit her target score for a 3A girl golfer. Three other girls finished ahead of her, otherwise she would have qualified for the state as an individual.”

Senior Grant Huneycutt has the team’s longest run at over 200 yards.

Huneycutt has played with the team for three years.

“I don’t really have a favorite part of the game,” Huneycutt said. “I’ve been playing for a long time and I just want to play a lot more. We did quite well last year and hopefully we can qualify for state this year.”

Consistency on the golf course is key.

White said senior Leonard Huff is capable of shooting into the low 40 in a nine-hole game.

Huff says he likes to hit the court at his own pace, and his best clubs are his woods.

There are currently no student prospects in the Jessieville boys or girls team.

“We do have some good guys, though,” White said. “In the ninth grade, you can tell that some of them have a skill, and the hours you put into it, you can tell if they’re going to become a golfer or not.”

The training sessions are a mix of girls and boys, which makes coaching both teams together a little easier for White.

Jessieville has started something new this season where seventh and eighth graders can come and practice with the teams. However, they cannot participate in competitions.

A typical match would be nine holes with a stroke limit per hole. They run the course without golf carts, and they will set the groups based on skill for the pace of the game.

Jessieville started the season Monday against Danville and Cossatot River. Holland, who narrowly missed the individual cut for state last season, was the only girl of the three on Jessieville’s roster to compete on Monday.