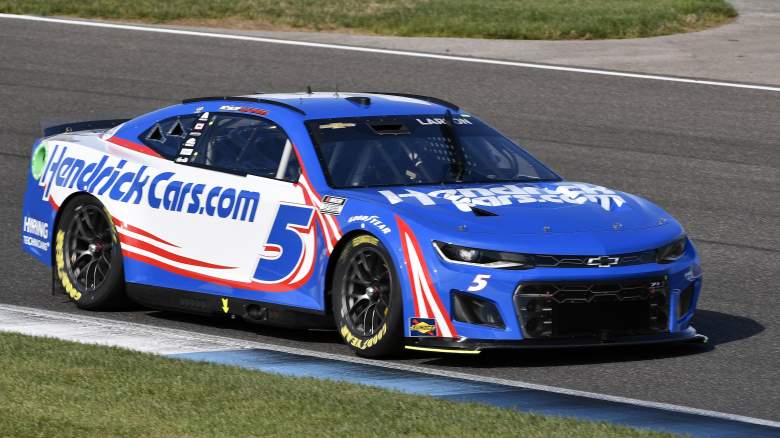 The Verizon 200 Cup Series race at Indianapolis Motor Speedway came to an early end for Kyle Larson after crashing into Ty Dillon at over 100 mph. Now Hendrick Motorsports has shared more information about the crash.

There were several questions in the wake of the crash, as many wondered if a mechanical failure led to the violent collision. Was the cause a stuck accelerator or lost brakes? Hendrick Motorsports told FOX Sports’ Bob Pockrass that the brakes did not give out. “Kyle got too deep into the braking zone and got out of shape.”

“Yesterday was pretty much the hardest thing I’ve ever been hit by anything,” Dillon tweeted on August 1. “Thank God I’m okay and these cars are safe enough to make such a shot.”

There were discussions in the wake of the crash as to whether Larson had lost his brakes before crashing into Dillon’s No. 42 Chevrolet popped. The analysts in the booth even discussed this possibility. Although they also said there was audio from Larson on how he had a pedal after coming to a stop in the grass.

ALL the latest NASCAR news delivered straight to your inbox! Subscribe to the Heavy on NASCAR Newsletter Here!

Talks about the crash continued on FOX Sports’ “NASCAR RaceHub.” Host Adam Alexander spoke to Larry McReynolds and Bobby Labonte about the incident, the length of the straight into Turn 1 and the speed the cars can achieve before entering the braking zone.

“When I saw this, I went, ‘What the hell just happened?’ Because in my experience there are only two things that can cause that,” said McReynolds. “And that’s losing the brakes or a stuck throttle.”

McReynolds went on to say that he went to bed believing there was a brake failure based on the information he had at the time. He noted, however, that Hendrick Motorsports had abandoned the idea that there was a mechanical problem.

The crash involving Dillon was the last incident for Larson, who turned 30 on the same day. He fell several laps after some early setbacks, including an unscheduled drive down the pit lane.

The first occurred on lap 24. Larson reported having a flat tire after contacting Stewart-Haas Racing’s Aric Almirola. He went into the pit lane for repairs and new tires before finally rejoining the track three laps later.

The problems continued during the final phase. Larson spun on lap 46, forcing him back to the pit lane for new tires and fuel. He then collided with Dillon on lap 62 and ended his day at the care facility.

With the latest information from the Cup Series team, there will now only be questions until media members meet Larson at Michigan International Speedway. He could provide more details about the incident during his availability on the two-mile track.