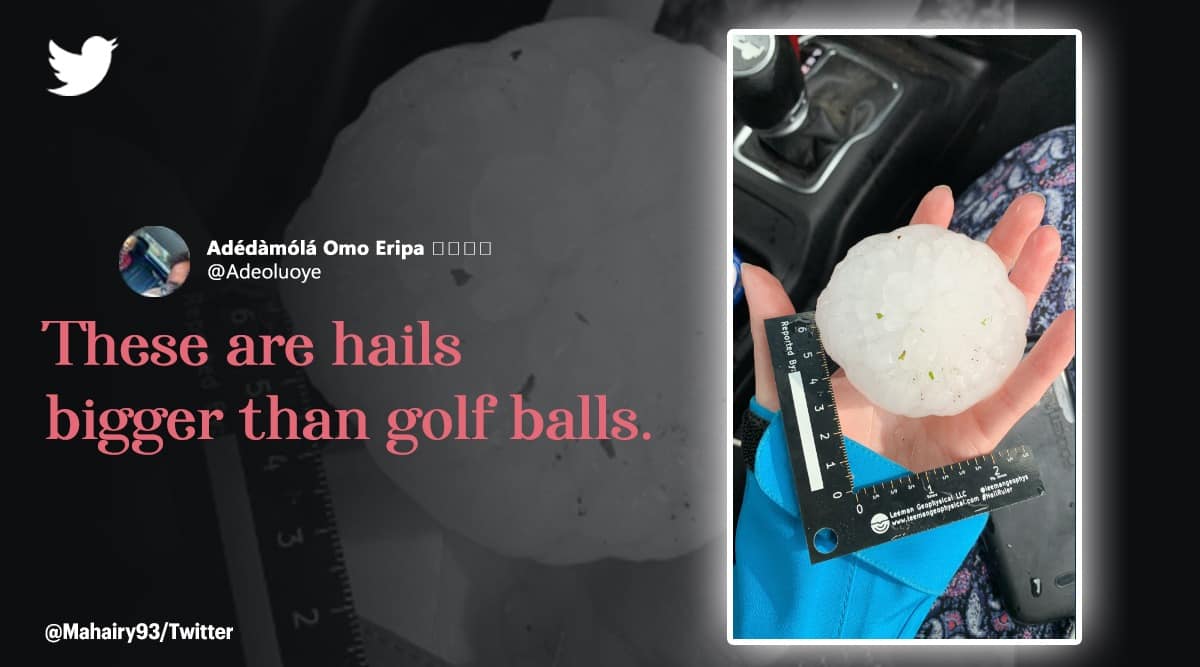 On Tuesday, a massive hailstorm hit Alberta, a western province of Canada. It was reported by CBC News that the hail storm was triggered when a tornado hit the ground near the city of Coronation. Fortunately, despite the sudden storm, no serious injuries requiring hospitalization were reported.

What made Tuesday’s hail storm unique, however, was that it suddenly appeared with hailstones the size of a tennis ball. The intense storm that lasted about 15 to 20 minutes caused a lot of damage to vehicles. According to the Royal Canadian Mounted Police, the hail damaged 34 vehicles and caused three collisions.

After the storm subsided, people took to Twitter to post photos and videos of the freak weather incident. Many people shared chilling videos showing the hailstones falling through their car windshields as people inside the vehicle covered their heads with their hands or purses.

A Collection of Large Hailstones from Outside by Markerville Aug.1/22
Forgot the caliper, so took some home to measure. The largest is 75mm and 106g, the smallest 51mm, 51g. After some melting. #abstorm @Albatrossoar @NHP_Reports pic.twitter.com/T74EeUnbtM

Got stuck in the huge hail storm at the bottom of Antler Hill in between #red Deer and #Innisfail. Fortunately, only the car was damaged. Weird things to do. #abstorm pic.twitter.com/3hLnJDhEK7

Now is a good time to thank the people who put plastic in windshields and made windshields mandatory for insurance.
That must have been pretty crazy!

I got caught up in it too. My windshield and car interior looked like yours and my hatchback window was all smashed out. Grabbed a towel from my passenger seat and covered my face and bare legs… I was terrified. The noise – never experienced anything like this and hope never again. pic.twitter.com/Kszb9aD63E

#abstorm my heart goes out to all the people stranded along the QE2 outside Reddeer. Vehicles have been stranded in full with ppl. Windows and lights were broken. Vehicles covered in hail 🙁 pic.twitter.com/gWKFfMNatL

Softball-sized hail reported in the Markerville and Innisfail areas during the August 1 storm https://t.co/ZcYqLLwFqn pic.twitter.com/XZXPauiqCi

Met a very shocked family at McDonald’s in Innisfail who got caught in the hail. Everyone is fine and they were very nice to let me take pictures. 8:10 p.m. #abstorm pic.twitter.com/gxbkNaDIHx

I never want to experience that and will always try to keep an eye on weather radars if I’m in a storm or car chase.
I understand that sometimes you can’t get around it.

I really hope everyone is okay. pic.twitter.com/FdOIL3nT2i

I can’t agree. In a panic I took this without putting it properly in the ruler 😂. Tennis balls when it was NW of Markerville at 5:40 PM. They are still coming down. Stay out. #abstorm pic.twitter.com/TpGJCUD6ZM

One Twitter user shared photos of their damaged car, writing: “I got stuck in the huge hail storm at the bottom of Antler Hill between #resdeer and #Innisfail. Luckily only the car was damaged. Some crazy things to experience . #abstorm”.

Pat Boomer, a weather enthusiast and storm chaser, shared photos of the large hailstones against a measuring device, writing: “A collection of large hailstones from outside by Markerville Aug 1/22 I forgot my caliper so took some home to measure The largest is 75mm and 106g, the smallest 51mm, 51g.After some melting.#abstorm @Albatrossoar @NHP_Reports”.